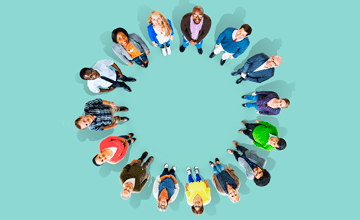 Barrister and mediator Paul Sills explores how understanding and accepting universal principles is a step towards embracing diversity in Part 2 of his 5 Part series on diversity. In Part 1, he provides an introduction to the series.

Humans are diverse, different, a collection of individuals inhabiting the planet and all competing for our share of what’s available.

This statement is true, and not true. To understand this paradox we must examine diversity on two different levels: our experience of being part of a complete whole and diversity as part of the human condition. One is life and the other is our life’s experiences (Eckhart Tolle). One we share, and the other sets our individual identity, reality and perspective. This article discusses the unity aspect.

The Big Bang theory proceeds from a point in time when everything was within a singularity and connected. The relationship continues in an expanded universe despite the increased distance between parts – connection continues from the point of origin as a wave. Mankind has understood these principles since before recorded history yet they are still not part of our everyday language.

In case metaphysics or spirituality do not work for you, quantum physics also tells us that at the level of our existence we are all the same and there is no diversity. At the sub‑atomic level everything exists as states of energy and information that vibrate at certain frequencies. The difference between an atom of lead and an atom of gold is in the frequency of vibration of energy and information at the sub‑atomic level.

At the quantum level of existence all possible states exist at the same time (wave/particle duality) and it is through observation that any particular state manifests (into what we call reality). Have a look at the phenomenon that Einstein called “spooky action at a distance” – which is only possible through wave mechanics.

We see quantum physics at work every day. For example, in the controlled release of energy from the sun, the operation of your smart phone, and your television. However, like metaphysics, the principles are poorly understood and applied.

Abraham Maslow and Carl Yung showed us that we are the same when it comes to our needs. The five different levels in Maslow’s hierarchy of needs are:

We all have the same desire to grow, to protect our children and to strive for an understanding of life. Whether you are a student of spirituality, quantum physics, religion or the modern self‑help industry, all roads head in the same direction:

If we start with an acceptance of our underlying “sameness” and our interconnection to all things, then it is easier to see that there can be unity in diversity within our everyday interactions too. This is the concept of “unity without uniformity and diversity without fragmentation” (Ibn al-Arabi – Sufi philosopher 1165 – 1240). This shifts the focus from unity based on a mere tolerance (of physical, cultural, linguistic, social, religious and ideological differences) towards a unity based on an understanding that our differences enrich us all.

This idea dates back to ancient times in both Western and Eastern cultures. The concept of unity in diversity was used in non‑Western cultures (for example North America and in Taoist societies) in 400-500 BC.

In the pre‑modern Western culture this idea is also implicit in the organic conceptions of the universe that have been manifest since the ancient Greek and Roman civilisations through to medieval Europe and into the Romantic era.

“Unity in diversity is the highest possible attainment of a civilisation, a testimony to the most noble possibilities of the human race. This attainment is made possible through passionate concern for choice, in an atmosphere of social trust.” – Michael Novak

If these universal principles were more readily understood and accepted, we could draw on them when resolving conflict by recognising and appealing to shared interests and principles. This may assist in keeping the parties grounded and connected in a way that allows them to acknowledge and explore their differences in a more secure and useful way.

Paul Sills is a barrister with over 20 years’ experience working in global litigation markets. Paul is also an accomplished business leader, having been involved in a diverse range of companies (as CEO or director) including the marine industry, global health care and international freight. Paul has been engaged in mediations both as a legal advisor and as a client since 1995 and as a mediator since 2010. These have included multi-parties and complex issues surrounding Treaty of Waitangi settlements, aviation disasters, leaky homes, construction and receiverships. With a unique understanding of the challenges businesses and individuals face and drawing on his years of commercial and legal experience, Paul provides timely and cost-effective solutions for his clients. Paul’s appointments include Associate Member of AMINZ, a member of the panel of mediators for the Marine Industry Association, Triathlon NZ Age Group Adjudicator for 2015 and 2016 and a member of the panel of mediators for the New Zealand Law Society. Paul is approved to assist with the Society’s Early Resolution Service, as well as standard track mediations. As a barrister Paul maintains both an active commercial litigation practice and a comprehensive mediation practice. Contact Paul at paul.sills@paulsills.co.nz or connect via Twitter