Chat with us, powered by LiveChat

Special leave grants by High Court at a 10-year low

Melbourne Law School Professor Jeremy Gans analyses the special leave grant statistics from the High Court and discovers that last month, such grants were at their lowest in a decade. The drop in special leave grants appears to be part of – and perhaps an acceleration of – a broader pattern of the Court hearing fewer and fewer cases, he writes.

October saw no special leave grants in the High Court of Australia, either on the papers or in the last Friday’s oral hearings. The last time this happened in the High Court was nearly a decade ago, in August 2009, but that was surrounded by much more fertile months, including thirteen grants three months previously. By contrast, October’s fallow month follows a previous one with just one grant (in a relatively minor matter involving the statute of limitations applicable to local council applications to collect unpaid rates.) Unsurprisingly, this dry spell leaves the current count of special leave grants, 28, the lowest at this stage of the year in the past decade: 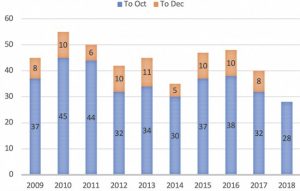 As this graph shows, November and December often add close to ten to that total, making it quite possible that the total grants by the end of 2018 will exceed 2014’s low point of 35 grants. However, it is unlikely that this year’s total will exceed last year’s of 40, itself the second-lowest of the past decade. Although the annual number of grants ebbs and flows, the recent trend is downward: from the mid- to high 40s to the mid- to high 30s.

Importantly, though, these regular hearings and scheduled determinations for considering grants of special leave to appeal (and some removals from lower courts) does not show the full story of the High Court’s case load, which notably includes matters brought in the Court’s original jurisdiction as well as some matters transferred from lower courts outside of the process of regular hearings and determinations. In recent years – especially 2016 and 2017 – a significant number of cases have reached the court through parliamentary referrals to the Court of Disputed Returns and (now abolished) appeals from the Supreme Court of Nauru. In the past month or so, matters that have reportedly commenced in the Court outside of the regular special leave channels include:

But 2018’s crop of such matters is hardly unusually large.Rather, the drop in special leave grants appears to be part of – and perhaps an acceleration of – a broader pattern of the Court hearing fewer and fewer cases, coming as it does at the end of a decade where the Court averaged only fifty substantive judgments a year.

The reasons for these shifts in the Court’s behaviour are unclear. For instance, I have not attempted to count the number of special leave applications (a difficult task given that such applications include many often hopeless immigration and unrepresented litigant appeals) nor is there an easy way to assess whether there has been a change in the quality of such applications. That being said, the recent fall coincides with a curiously quiet time in the Court’s docket, with just three matters heard in October. There are signs that the Court itself is trying to expedite its hearings, including commencing two recent hearing days early (and skipping the morning toilet break) in an effort to wrap them up by lunchtime.Right now, the Court has twelve matters reserved and fourteen pending to be heard (not counting the secret Victorian matter whose status has not been revealed.) Possibly, the Court’s workload has been diverted to some especially difficult matters before it, such as the recent challenges to abortion safe zones or the complex native title compensation matter the Court heard in Darwin in September. Alternatively, perhaps the Court is working to clear space for future contingencies, such as a rush of referrals to claims before the Court of Disputed Returns that may accompany the next federal election.

This article first appeared on the Melbourne Law School blog Opinions on High. Note the licence terms if you wish to reuse or distribute this content.

Jeremy Gans is a Professor in Melbourne Law School, where he researches and teaches across all aspects of the criminal justice system. He holds higher degrees in both law and criminology. In 2007, he was appointed as the Human Rights Adviser to the Victorian Parliament’s Scrutiny of Acts and Regulations Committee. His early research focused on fact-finding in sexual assault trials, the subject of his doctoral thesis and a number of published articles, and criminal investigation, especially the technique of DNA identification. He is the author of a criminal law treatise and a co-author of texts on evidence law and criminal process rights. He has contributed to public debate on criminal justice in a number of forums, including publishing a running commentary on Victoria’s Charter of Human Rights and Responsibilities at charterblog.wordpress.com in 2008.